Oldschool punk reminds me of my own youth, when I still had blue hair and clothes, that I stitched together from old clothes and fabric. The outlook is different today, even though the inside and mind still remains the same (yes, I still have the same two kidneys and lungs). There is so much to learn and take from punkrock and you sohuld always keep this spirit alive in this mad world.
Some bands still keep this spirit alife and this makes me feel confident that something did not die out.
On 19. December, a few days before silent Christmas, the two loud punkbands District and The Vageenas invited for an anniversary show at the Trompete in Bochum.
The venue was located in the city centre of Bochum and the most funny thing was, that you had all these black-clothed punks standing outside before they were let in and next to the Trompete was a fancy restaurant with a very expensive looking furniture and more expensive looking people inside. A great contrast, that I loved a lot.
The venue was located in a basement, so the place was greatly chosen for a show that is called „Going Underground“.
District invited to celebrate their 20th anniversary. Even though this band has gone through a couple of changes not only with their name, but also with some band-members. Today, they are standing on the stage with some members from the original line-up and some new ones.
At first, the band Vageenas rocked as hell and the sticky air filled with swet. This band is as old as District and was founded in 1994 by punk-heroine Babette V. A pink-clothed and fully tattoed lady, that burst with energy. She was jumping, running to the counter of the bar, sang from there, ran back, jumped again, ran to the other side of the room, where she was standing in the middle of the crowd. What energy she had and this energy was reflected in their music as well. Sometimes the musicians were alone on stage for some time, because Babette was with the people in the crowd.
The main act of the night, District, shared the same drummer as The Vageenas and it must have been an intense night, playing for two powerful punk bands.
The band and especially the look of the singer Marc De Burgh reminded me about a time, that reminded me of the 90’s and felt a little younger. Maybe?
Their music was intense, loud, some songs were so familiar to me and it was great to hear them again. The crowd was active to every single note and sang many lyrics and made a great choir. It was hot and sweaty and worth being there. Thanks to both bands for an amazing night of good old punkrock and raw energy. 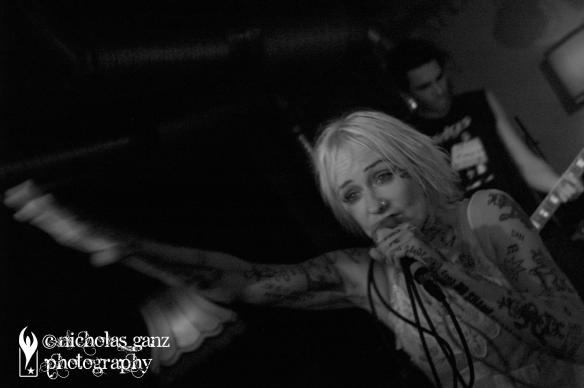 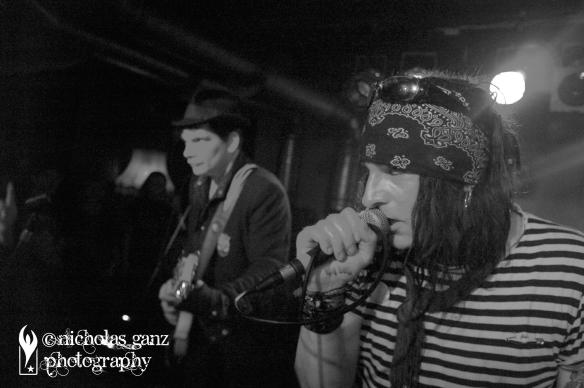 And a little video, the quality is not so good, because of the lack of good light in this place: